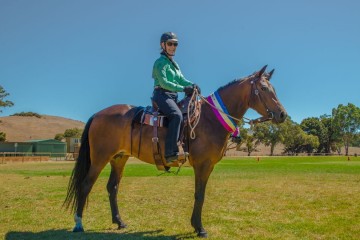 We were totally inexperienced when it all began. We were just enthusiastic Trail riders who didn’t know too much about the skills of riding, but knew we loved the time spent with our horses and like-minded people.

Then we discovered the Morgan horse, and the more time we spent with our Morgans, the more impressed we were with their nature and ability. We developed a passion for the breed that we felt we just had to share with others.

When we look back on the events that led us to become Wilga Park Morgans, it is plain to see that the Universe, and the Morgan Horse, chose us to play a small part in the establishment of this magnificent breed here in Australia.

Initially we were not planning to become a Morgan stud. We were just going to breed one foal from each of the first two mares we had purchased, Eagleview Skybeau and Mt Tawonga Natasha, but it seems there were much larger plans awaiting us.

Wilga Park Morgans was conceived at a Dressage competition where my very nervous wife, Kathy, had just ridden in open competition on her Morgan mare, Calypso (Eagleview Skybeau), and our friend, Jane Warren, had competed on my Morgan gelding, Mt Tawonga Nepean.  The image of those two women, smiling and chatting happily about the tests they had just ridden as their Morgan horses sauntered along on loose reins was such a contrast to what I had been witnessing with other horses and riders.  Those other frustrated, unhappy women I watched were never going to be competing at the Olympics, so why were they torturing themselves with unsuitable horses, when they could be having fun and winning ribbons with a Morgan horse?

The events of that day were to inspire us to establish our own stud, Wilga Park Morgans.

Our dream was to breed a horse with the temperament, conformation and ability to connect with their rider regardless of the style or discipline they chose; a horse that would be an enjoyable companion and riding partner.

This would require careful consideration of the mares we chose. They would have to have a gentle temperament, a willing nature; be sound; have good conformation, paddock appeal and brave hearts.

Our goal was to have five mares of differing ages. We planned to train and ride our mares so we would have some idea of the ability and traits each would pass onto their respective foals.

As we were relatively new to the horse industry and had no experience with handling stallions, we planned to breed to Morgan stallions in Australia.

Over some months we had added to our band of mares. Mt Tawonga Natasha was purchased as an 18 month old shortly after we had found Kath’s trail riding Morgan, Calypso. Haymeron Park Ruby Jane and Red Bluff Paprika were also purchased as youngsters.  Along with Calypso and Mt Tawonga Marrella, purchased in foal to Mt Tawonga Tarraji, we had our five mares.

As we progressed with our plans, we realized that we would need riding geldings.  Mt Tawonga Nepean and then Mt Tawonga Oscar, full brothers to Mt Tawonga Natasha, joined our little herd.

The gene pool in Australia was quite small so we had begun to research importation of a stallion of our own. I had always dreamed of owning and riding either a Dun or Buckskin horse and as there were no dilute (coloured) pure Morgans in Australia, we decided it was time I had that horse.

It was again through a set of circumstances beyond our control, and a suggestion from a great friend, Di Howard, that led us to inquire about a just turned 6-year-old, buckskin stallion in California, bred and owned by Nina Bates of Bossert Ranch. His breeding was impeccable; the son of Primavera Valdez x Telura’s BlackGold, both Western Working bred horses and recognised Foundation lines.

After months of negotiation we were to become the proud owners of RanchBoss Cortez.  His hooves hit Australian soil in Sydney in late 2005.  He was the first dilute pure Morgan for Australia.  A very generous friend, Deborah Saunders of Windsor Park Morgans accommodated Cortez at Mangrove Mountain once he was cleared from quarantine, so that we could visit family in Sydney over Christmas and then travel Cortez home with us.

During this time, we had also formed a syndicate to import frozen semen from another Morgan stallion who would guarantee us a dilute foal every time.  This was the lovely perlino stallion, Ragtime Oro Blanco, otherwise known as Casper. Casper was just 4 years old. Though he was un-started at the time, he has since gone on to do well in Cowboy Dressage under the guidance of his current owner, Peggy Malone of Takilma Gold Morgans, USA.  Our Casper semen has provided Australia and New Zealand with 2 buckskin fillies, 1 buckskin and 4 palomino geldings and 2 buckskin stallions.

The first time we met Cortez it was clear that he had been given an excellent start.  He had perfect ground manners and his temperament was everything we could have hoped for, plus more. His glittering gold coat was peppered with just the right amount of black and his conformation, love of people and size at 15.2hh was perfect for us.  How could we be so lucky?!!!

Once home and settled in Toowoomba, Queensland, it became obvious that even though Cortez had been started under saddle (at age 5) and had 3 months reining training, there was a lot more work to be done to have him balanced and ‘competition ready’ if he was to become the face of Wilga Park.

Both Kath and I had done some riding as kids but only took up ‘real’ riding again with the encouragement of our close friends Trevor and Robyn Nahrung when we were in our early forties.  We became enthusiastic (though in Kath’s case, also terribly nervous!) Trail Riders.  However, to be a stud owner, expectations of your riding abilities are higher, so we enlisted the help from two people that were to become our close friends and riding mentors Rachel Whan (now Hodgson Park Morgans, WA) and Linda Shore (Dressage 2B Shore).

While Rachel coached Kathy, Linda had the unenviable task of trying to train me! It was at one of Cortez’s early training days, after a comment from another student about Cortez’s abilities at age 6, that I made a deal with Linda.  She was to be his only rider and Cortez would not be seen in public until he was competition ready.  Linda would then compete Cortez with the aim to have him qualify for the Queensland State Dressage Championships, at Novice level, at the end of that year.

The greatest challenge, when we started breeding Morgan horses, was that they were not well known in Australia and, with only a little over one hundred pure Morgans in this country at the time, it was little wonder.

I had a vision to bring this unknown breed to the attention of Australia!  With the assistance of many friends, we began a campaign to promote the Morgan horse with demonstrations at Agricultural shows, Dressage Events, large One Day Eventing competitions, at Toowoomba Royal Show and any venues where large numbers of ‘horsey’ people would gather.  Linda and Cortez did demonstrations at the Rodeo Museum in Warwick for bus-loads of tourists.  We held Open Days at our property where we offered a BBQ lunch and educational entertainment on the arena with our Morgans.  Wherever we could find an avenue to promote the Morgan horse, we did! We even took our horses to local Kindergartens.  Demonstrations with Linda became a routine part of Cortez’s life.  They performed their bridle-less displays at EKKA each year and were even invited to Equitana Sydney and Equitana Melbourne to perform in Western Dressage.

Our mares were producing some lovely foals.  We had created a website that was simple and easy to navigate and every couple of months our Latest News page was updated with stories of what we were up to with our Morgans.  Soon Wilga Park Morgans and Cortez were known world-wide.  Face book and advertising in Horse Deals Magazine Stallions Editions have been excellent tools in spreading the word.  Our philosophy, or motto, “Temperament cannot be taught … it is passed from generation to generation” was formed around Cortez’s amazing personality and he has proven it with his progeny.  In our experience, once people meet Morgans up close, it is not long before they are dreaming of a Morgan of their own.

Cortez’s achievements in open competitions, his gentle character and his sort-after bloodlines soon drew attention from around the world.  This has eventuated in Cortez siring foals in Canada and the USA via frozen semen. Due to transport and quarantine costs we were not been able to fill orders from Europe.

In 2015 Cortez was recognised as the most prolific breeding Stallion in Australia with over fifty pure bred progeny in this country. He has had twelve pure bred foals born overseas since 2005 when he became an Australian.  There are also a number to be born in coming months.  We get just as excited about those foals as we do our own.

The Wilga Park Morgans story has seen lots of change since those early days where we went from owning a couple of Morgan mares and living on seventeen acres to a Morgan Stud with twenty-four Morgans grazing on one hundred and fifty acres.   We had the great fortune of being able to lease a number of mares over the years, and those mares also produced some beautiful Cortez foals for us, and their owners.

Today, in our retirement on ten beautiful acres on the top of the Blackall Range, we have Kath’s riding gelding, Mt Tawonga Oscar, and our dream stallion, RanchBoss Cortez, who is still happy to entertain any filly who bats her lashes at him.  We also have the security of frozen semen from Cortez here in Australia.

Our Morgan Horse journey has provided us with a fantastic lifestyle and created many, many close friendships.  How could we have ever known, when Kathy picked up that little coffee table book on horses, she would find a horse so perfect that it would change both our lives and take us on such a wonderful adventure.

Back then we could not have foreseen that the Morgan Horse would introduce us to Morgan breeders and horse enthusiasts across Australia, Canada, New Zealand and USA and that Wilga Park and its breeding program would attract attention throughout Europe.

Though we no longer breed little Morgans ourselves, we know we will be just as proud of all the Cortez foals that are yet to arrive, both in Australia and overseas.